I had proper haggis once. Well, as proper as you can get in Canada, anyway. It was at a Robbie Burns Day celebration in the small town of Ayr, and if I remember correctly, the haggis was from a specialty shop in Hamilton, Ontario. There was an old guy in a kilt who recited “Address to a Haggis” and, at the appropriate moment, stabbed the haggis with a dagger to let the “gushing entrails” spill forth, “warm-reekin, rich!” What little I got was delicious but years later, I don’t remember the details of exactly how it tasted. I have every reason to believe it was stuffed in a sheep’s stomach and the “entrails” involved heart, lungs, kidneys and assorted other parts I prefer not to think too much about.

This is not that kind of haggis.

This haggis was inspired by my friends Dan and Meredith, who had/have a food blog called The Haggis and the Herring, a name that brings together their respective British and Jewish heritages in the sort of cultural mashup I love. Dan, sadly, died suddenly about a year and a half ago, and his brother Abisaac, who runs the blog Gluten Free Edmonton (it’s sheer coincidence that Abisaac’s wife is celiac and that Edmonton is my hometown – I didn’t meet Dan there), posted a slow cooker haggis recipe in memory of Dan on The Haggis and the Herring.

My haggis too is for you, Dan. I miss you.

For this Robbie Burns Day, I knew I wanted haggis but I knew I didn’t want to try to locate a sheep’s stomach, never mind try to stuff offal into it. I thought briefly about making haggis in a loaf pan but decided I’d end up with just plain meatloaf – and besides, a haggis is supposed to be simmered in water or stock, not baked. So it was this recipe that finally pushed me to go to the store and buy a slow cooker. I’d wanted one anyway – I had two in Canada but had been going without since moving to England last summer. It was time to change my slow-cookerless existence.

I didn’t follow Abisaac’s recipe exactly. Some would say I’m pathologically incapable. I would say I did a mishmash of a few different modern haggis recipes I found, adjusting things to my own taste and making the haggis low-FODMAP (well, eliminating the onion, basically) and offal-free. I also decided not to use the traditional suet, in part because I wouldn’t know where to get suet anyway.

I started by mixing together a cup of gluten-free oatmeal, minced celery, grated carrot, sage, thyme, cinnamon, clove, allspice, salt and pepper. I then added in a packet each of minced lamb and beef. My four-year-old daughter helped mix it all up.

I then pressed the mixture in a large glass bowl and made a sort of flattened ball with it. I turned it into the slow cooker and was surprised to see how neatly it came out. 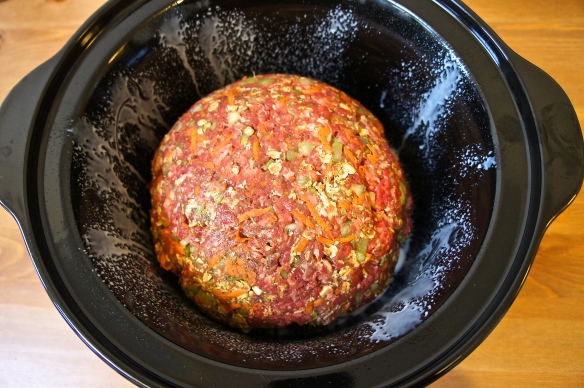 I didn’t have any low-FODMAP broth so I just added a cup of water to the slow cooker. I figured there was plenty of taste in the haggis itself.

I turned the slow cooker on high because I had started cooking kind of late – after all, I had to go buy the slow cooker and ingredients first. (And incidentally, both the Sainsbury’s and Wilkinson’s were out of stock for slow cookers. Asda, fortunately, did not let me down. But why was there a run on slow cookers now, if that’s what happened? England has been cold and damp since September.) Meanwhile, I made shortbread with my daughters, taught my older one a bit about Scotland, and thought about what to serve on the side.

The traditional accompaniment to haggis is neeps and tatties, which I gather is how Scots might say swede (AKA rutabaga – though “neeps” sounds more like turnip to me, it’s a different vegetable) and potatoes if they want to sound like kilt-wearing caricatures of themselves. However, I found no agreement online as to how said neeps and tatties ought to be prepared. Some sources said to mash them and serve them separately. Others said to mash them together. Others went for chunky and either together or separate.

I let laziness decide. BBC Good Food suggests preparing both the potatoes and swede the day before. I didn’t purposefully do that but I did made oven-baked chips/fries the day before as an accompaniment to roast chicken. We had plenty left. Ergo, the tatties part was more or less taken care of.

I hadn’t pre-cooked my swede, but I chopped it into small pieces to make it cook faster, though this still wasn’t very fast – having not cooked swede very often, I was surprised at how long it took to get soft at a roiling boil.

I pan-fried my leftover chips in butter and added chives. When the swede was finally cooked, I roughly mashed it and also added butter, chives, salt and pepper. Then I had a dilemma – should I mix them together or not?

I actually quite like swede. Especially roasted in chip form. My kids, however, and even my husband, not so much. I really wanted to put the neeps and tatties together but I had visions of them variously:

So. I served them in separate bowls and mixed them together on my own plate. I thought it made a lovely combination, as you can see from the picture on the top of this post. The hubs and my older daughter ate tiny amounts of swede, separately from their potatoes. The toddler refused to touch it. Oh well. They missed out.

I’m getting ahead of myself. Back to the haggis.

After three hours on high in the slow cooker, I figured the haggis was probably cooked but it was grey on top and my husband commented it looked like brains. So I put the whole ceramic pot in the oven at a relatively high heat to brown the top.

While it browned, I steamed the green beans and samphire, and boiled some roughly chopped carrots. Let me pause here to say samphire is my latest love. This was only my second time eating it, because I’d bought a bag on impulse a few days before. I’d actually never even heard of it until I saw it for sale. It’s a plant that grows by the seaside and is delicious simply steamed for a few minutes. It’s a bit fibrous but has a lovely taste a bit like salty asparagus. Not overwhelmingly salty, just pleasingly reminiscent of days at the beach.

A bit of brown sugar and butter finished the carrots and once I turned the haggis’s “honest, sonsie face” onto a plate, we had a feast fit for a “Rustic, haggis-fed.” Aye!