I’ve been wanting to make gravlax (AKA gravad lax) for some time now. Salmon is one of my favourite foods, especially when raw or semi-raw, and the idea that I might be able to cure my own salmon without buying a smoker or paying extortionate prices for sashimi-grade salmon strongly attracted me. However, for a long time I was nervous because the recipes I’ve seen vary dramatically. Some call for as much as a full cup of salt while others call for as little as a couple of teaspoons. Some call for much more salt than sugar; others call for much more sugar than salt. Some recipes I’ve seen also make the process seem incredibly complex, involving weights, precisely timed curing, even the use of thin slices of lime that can’t actually touch the fish.

After consulting a ton of recipes, I became convinced that a fairly minimalist approach would work, but although I wanted to simplify the process (and avoid ending up with a fish-flavoured lollipop or salt lick), I also wanted to experiment with a variety of flavours. So I ended up making four different kinds.

All of them were good, in their own way. Seriously. Citrus dill gravlax, however, was my favourite. Before I tell you why, let me explain the process I used.

Most recipes tell you to start with a whole salmon or at least a side. Because I wanted to make multiple kinds, and also because Ocado, my favourite-ever supermarket, which happens to be online-only (innovation-deficient Canadian supermarkets, take note), happened to have it on sale, I ended up using two 500-gram packs of four salmon fillets each – two small fillets per flavour. I figured that would be the right quantity that I could try four flavours (one fillet each) within the space of a few days and also have enough left over to freeze and eat later.

(In the future, if I make just the citrus-dill flavour again, I think I’ll go for half a side of salmon rather than fillets, because a larger piece would be easier to slice thinly. However,  the fillets were great for their experimental purpose.)

Most recipes advise keeping the skin on and making a kind of “sandwich” with dill and other flavourings between two pieces of fish. I thought this seemed odd. Partly because British supermarkets tend not to de-scale their fish (Why? Who wants to eat scales?), I thought it would be better to remove the skin first, so as to avoid the dilemma of not wanting to wash off all the goodness later but wanting to wash off the scales. Also, I wanted the cure to seep in on all sides of the fish, not just the top. So I skinned my fish.

I went for a relatively low level of both salt and sugar, as I wanted the taste of the salmon to shine through. Also, gravlax was invented when refrigeration technology was lacking, which fortunately isn’t the case now. (I can assure you that despite having a hypersensitive stomach, I was perfectly fine eating even five-day-old leftover gravlax.) I decided to use a mix of brown and white sugar so as to get in some of the molasses-y flavour of the brown sugar without making it overwhelming. I think all these decisions were good ones.

I used two tablespoons each of salt, brown sugar, and white sugar. This makes for a total of six tablespoons of salt and sugar. Yet mysteriously (well, OK, probably due to the packed brown sugar becoming unpacked), it turned into eight tablespoons of sugar-and-salt mixture for one kilogram of fish. Two tablespoons per group of two fillets didn’t look like a ton but it turned out to be just the right amount once I tasted it. I used this basic mixture for all the fish. 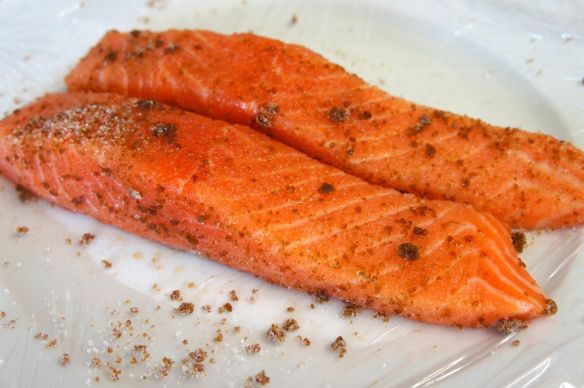 I decided to make four flavours: the classic gravlax with dill; citrus dill gravlax; whisky pepper gravlax, and spicy/smoky gravlax. For each of these, in addition to the above-mentioned salt-sugar mixture, I used: 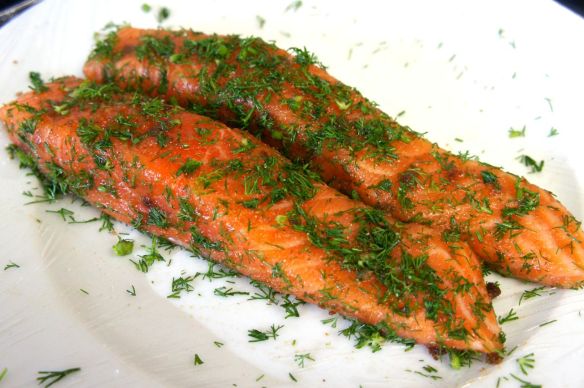 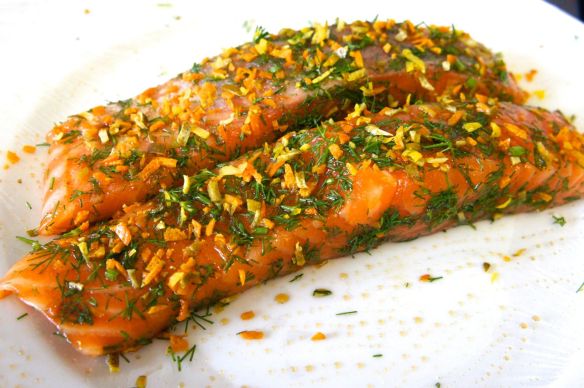 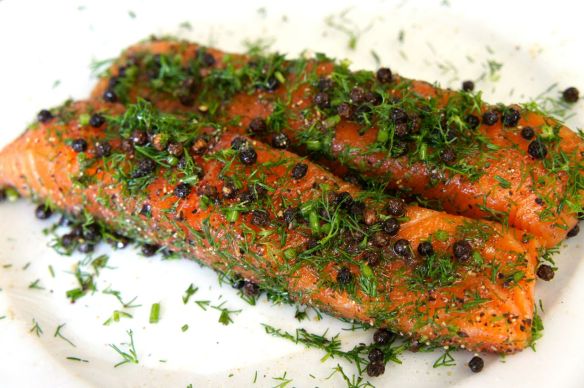 I wrapped both fillets of each flavour together, tightly binding them in two layers of PVC-free plastic wrap. I put each bundle in its own resealable bag and put all the bags in the fridge, turning them morning and night.

Some recipes I saw called for curing time as short as 24 hours, so I figured it would be all right to try one type after two days of curing. I selected the spicy/smoky gravlax to try first.

Spicy/smoky gravlax, most of the spices washed away

Sadly, this flavour proved to be the most disappointing. The ground spices had caked onto the salmon, so my first taste, without trying to remove the spices, tasted overwhelmingly of the spices, not the salmon. So I tried washing it off. In retrospect, I wish I’d tried harder to scrape the excess spices off rather than washing, because once I washed them off, the resulting gravlax didn’t taste very smoky or spicy at all. In fact, it didn’t even taste adequately salted or sweetened for gravlax. I still thought it was all right, since I love raw salmon, but it didn’t end up tasting like very much more than raw salmon. I still have one more fillet of this in the freezer, with all spices still on, so I may update after I’ve tried that, but lessons learnt for now:

On the third day, my family and I tried both the classic gravlax and the citrus-dill gravlax.

The classic gravlax was great, everything I had dreamed of in my vaguely Scandinavian-tinged dreams. (Reindeer! Saunas! Tasteful yet inexpensive furniture!) We ate some plain and some on toast. (The gluten-eating members of the family had rye toast, a classic accompaniment, while I made do with the nonetheless-very-good Genius triple seeded sandwich bread.)

For dinner, I decided to do something different. I made gravlax sushi with the citrus-dill gravlax, though I saved enough to try it just on its own as well.

This turned out to be a dual stroke of genius – not only this was the best gravlax I’ve ever had, it was fantastic as sushi (as well as solo).

I’d been happy with the classic dill gravlax, but as soon as I tasted this, I realized I’d managed to go above and beyond. While the classic gravlax was lovely, it tasted like the other gravlax I’d had before. But why go to the trouble of making something yourself if it isn’t any different from what you can buy? The citrus flavours elevated this gravlax to something new and wonderful without overwhelming the natural flavour of the salmon. Also, the sushi rice was an even better accompaniment than toast, because its flavour is more subtle. It really allowed the flavours of the gravlax to shine through, even when eaten with a little (gluten-free) soy sauce and wasabi.

I should add here that even my five-year-old and two-year-old loved this sushi. Sans wasabi.

On day four, I tried the whisky pepper gravlax. I had left this for last because I figured that if there were going to be any food safety concerns about having left raw salmon to cure for four days, they would be lessened by the whisky.

However, four days may have been too long to leave this one to cure, because it tasted rather too strongly of whisky. Don’t get me wrong – I like whisky. Though Glenmorangie isn’t one of my favourites, it’s still quite nice to sip. However, as part of gravlax, it was a bit too overwhelming. Not bad – it was still quite edible – but compared to the heavenly gravlax I’d enjoyed the day before, this was a bit of a comedown. As for the pepper, I think the quantity I used was appropriate – but it was hard to tell because the whisky flavour was so strong. If I make this again, I think I’ll reduce the whisky to one tablespoon (two tablespoons also made it a bit messy to wrap) and reduce curing time to three days.

For those who like skipping straight to the recipe at the end, here is the recipe for citrus dill gravlax that I plan on using the next time I make gravlax. It’s not exactly what I made, as you will be able to deduce from the text above, but I have every reason to think this will work to produce me a second batch of the best gravlax I’ve ever tasted.

Because I figure someone would ask me otherwise, here are some basic instructions on how to make nigiri sushi (that’s the kind with an ovoid of rice and a topping, usually fish).