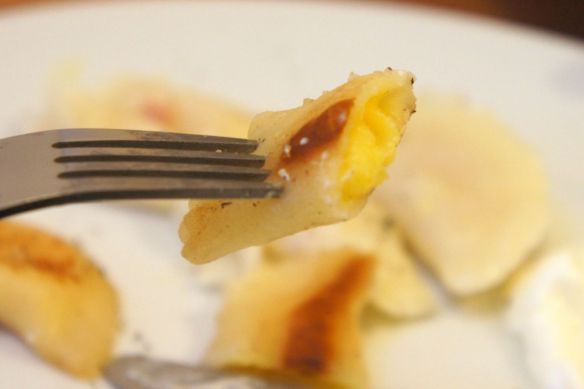 To me, perogies have always tasted of home. No, I’m not Ukrainian or Polish, but I did grow up in Alberta, Canada, which has a large Ukrainian population. The perogy (AKA pyrogy, pierogy, or as I’m reliably informed by Ukrainians, varenyky) has become thoroughly part of Canadian prairie culture, so much so that Glendon, Alberta, is home to the “world’s largest pyrogy,” which I once had the pleasure of visiting (along with the world’s largest kubasa, another prairie cuisine staple with Ukrainian roots).

In any case, the ubiquity of perogies is such in Alberta that my Japanese mother regularly made them at home when I was growing up. Oh, she didn’t make them from scratch – she brought frozen Cheemo perogies (which I still remember as the best brand; cheddar was the best flavour) and served them with soy sauce. Not traditional, perhaps, but really good. END_OF_DOCUMENT_TOKEN_TO_BE_REPLACED