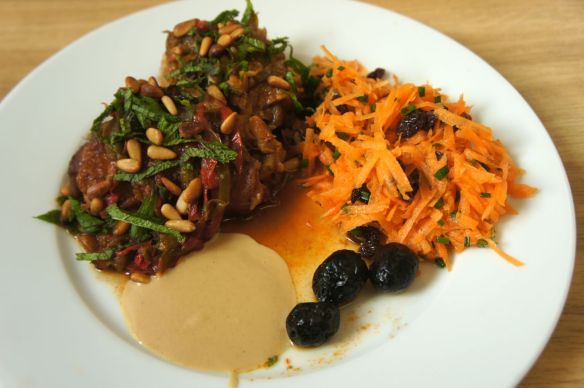 I usually try to write these blog posts the day I make the dish in question but sometimes I don’t manage to get around to it until some days after. Sadly, this is the case today. Sadly, because the leftovers are gone. Sadly, because I’m a bit hungry and I suddenly really want some more chicken musakhan. It was really good. The leftovers were even better. Sigh. END_OF_DOCUMENT_TOKEN_TO_BE_REPLACED

I went to Tenerife at Christmas with my family, which is where I first heard of conejo (rabbit) al salmorejo, a traditional Canarian dish. To be honest, I never had it there. We rented self-catering apartments and didn’t eat out much, in part because of my dietary restrictions, but if I’d had the opportunity to try this dish in a restaurant, I would have, as it’s normally gluten-free. Also, I would have loved to have tried rabbit. Sadly, it didn’t happen, so I decided I’d have to try to make it on my own.

Unfortunately, it’s not all that easy to find rabbit in England, so since I heard rabbit tastes like chicken, I decided to make it with chicken instead. Apparently I’m not the only one who’s ever had this thought, as pollo al salmorejo is an easy enough recipe to find on the interwebs. However, all the recipes I found, both for rabbit and chicken, varied considerably. I’ve tried it a few different ways and have found it’s definitely a recipe you can modify to fit your own tastes. However, this is the version I like best.

END_OF_DOCUMENT_TOKEN_TO_BE_REPLACED

I’m posting this a bit late, but this week has been American week at our house. Though Indian tacos and bannock were both Canadian and American, gumbo is totally Louisiana. I visited Louisiana once, years ago, before Hurricane Katrina changed New Orleans forever, and I loved the food. This was also before I had to worry about a gluten-free or low-FODMAP diet, so I chowed down on fried oyster po’ boys, muffalettas, beignets, crawfish étouffés, and of course, gumbo.

However, I left Louisiana feeling unsure about what a “proper” gumbo should be, because every one I had was significantly different. One was thick and stewy, another was thinner and soupy. One was full of seafood, another, if I remember correctly, featured only chicken and sausage. That’s because, I gather, every Louisiana chef has their own version of gumbo. About the only common ingredients seem to be some form of flour-based roux and okra. Unfortunately, both wheat flour and okra (it’s high-FODMAP) are out for me. So how to create an authentic-tasting gumbo without either of those ingredients?

END_OF_DOCUMENT_TOKEN_TO_BE_REPLACED

Feliz cinco de mayo! We celebrated Mexico’s day (not Mexico’s independence day, as I previously thought, but the commemoration of the Mexican army’s “unlikely victory” over the French at the Battle of Puebla, according to the all-knowing and ever-infallible Wikipedia) by making mole poblano (meaning from Puebla). Or, as I called it to sell it to my four-year-old, chocolate stew.

I love mole but haven’t made it often because the many recipes out there always seemed so complex and involved lots of ingredients not readily available to me. I don’t have the time or resources to search out three different kinds of chiles, nor the inclination to cook with a cup of lard. I can’t readily find tomatillos or avocado leaves (?!? one recipe I saw called for these) in England and high-FODMAP ingredients like garlic, onions and raisins would bother my belly.

Without all the above-named ingredients, was I going to be able to come up with an authentic-tasting, relatively easy-to-make mole? If you’re sceptical, I don’t blame you. I wasn’t entirely sure myself that I’d be able to pull it off. But I DID. Oh, how I did. This mole had all the rich, complex, smoky taste I craved, and yet I could serve it to my kids without them complaining it was too spicy (I added more cayenne pepper at the table for myself). END_OF_DOCUMENT_TOKEN_TO_BE_REPLACED

I used to love Ethiopian food. At one time it was one of my go-to cuisines when I ate out, which I used to do much more regularly. Sadly, until last weekend, it had been a long time since I’d had it. To my knowledge there’s no Ethiopian restaurant in the English city I’m currently living in and even where I used to live in Canada, none of the Ethiopian restaurants made their injera with 100 percent tef – they all used a mix of tef and wheat, meaning I haven’t been able to eat it for the last few years. I tried making injera once but it didn’t turn out well so I was scared to do it again. Also, my kids won’t eat more than very mildly spicy food, so I didn’t think I would be able to make food that tasted reasonably Ethiopian without having to make them a separate meal.

Finally, though, the craving got to me. I had to make Ethiopian food. Thanks to some shortcuts, it was easier and quicker than I expected (though still not a speedy meal considering the doro wat is a slow-simmered stew). END_OF_DOCUMENT_TOKEN_TO_BE_REPLACED 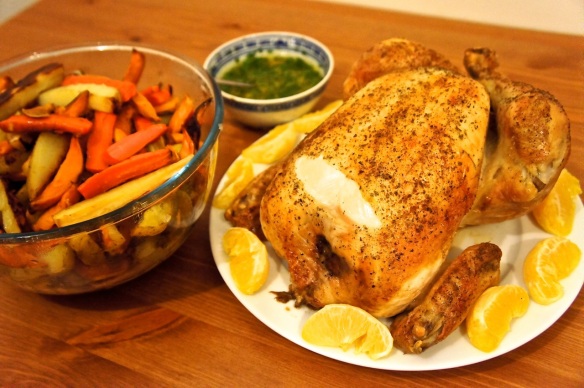 Our whole family loves roasted chicken and we also love fun words, so when I was researching our Dominican Republic weekend and I saw a recipe for pollo con wasakaka, or roasted chicken with garlic sauce, it was hard to go past. Unfortunately, garlic is high in FODMAPs, so I knew I was going to have to come up with an alternative. I’m a little ashamed to admit just how easy it was. END_OF_DOCUMENT_TOKEN_TO_BE_REPLACED 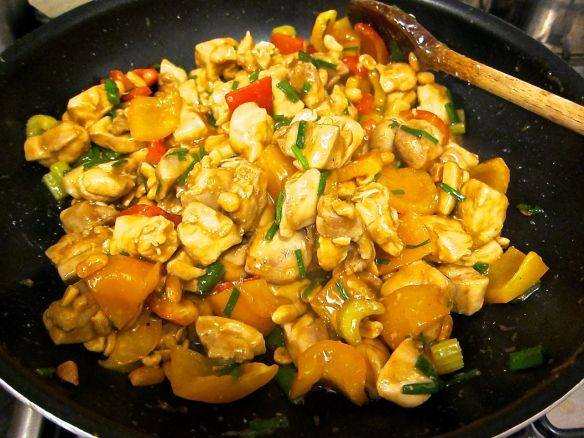 I love kung pao chicken. I make it regularly without consulting any recipes, so the following is a bit approximate. That’s OK. Kung pao chicken is a forgiving dish, the kind of dish where you get to unleash your creativity, improvise, maybe use up whatever’s in the fridge – and it’ll still come out tasty.

It might be argued that this isn’t a proper kung pao chicken at all, since it’s not spicy, or not necessarily. I have small children. If I make spicy food, they won’t eat it. Since I love hot food, I add the spice to my own plate. I don’t care what the purists may say – it’s still kung pao chicken to me. It has chicken. It has sweet peppers. It has nuts. It has kung pao chicken-y flavour. What more do you need? END_OF_DOCUMENT_TOKEN_TO_BE_REPLACED