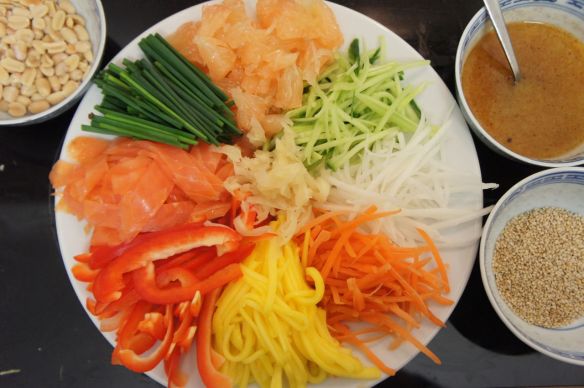 My husband and I now have a new favourite salad to which all other salads will henceforth be compared – and inevitably, they will fail to measure up, because yu sheng has got to be the king of all salads. It’s the perfect marriage of fresh, crunchy, tart and sweet, and it features smoked salmon, which is one of my favourite things in the world. And yet I’d never even heard of it until a few days ago, when I started researching lunar New Year dishes of Singapore and Malaysia. END_OF_DOCUMENT_TOKEN_TO_BE_REPLACED

Cullen skink. It sounds like a particularly unpleasant sort of lizard. But actually, it’s a delicious Scottish soup, hearty enough for a one-pot meal, quick and easy enough for weeknight supper when your kid has swimming lessons after school and you’re going to a PTA meeting after dinner.

Cullen skink normally contains lots of butter, milk or cream, onions and/or leeks. My version is easier on the tummy – gluten-free, grain-free, dairy-free, low-FODMAP, and full of healthy fish oils. For those paleo folks who eat potatoes, it could be considered paleo. However, it is still full of flavour, none the worse for the missing ingredients. END_OF_DOCUMENT_TOKEN_TO_BE_REPLACED

I’ve been wanting to make gravlax (AKA gravad lax) for some time now. Salmon is one of my favourite foods, especially when raw or semi-raw, and the idea that I might be able to cure my own salmon without buying a smoker or paying extortionate prices for sashimi-grade salmon strongly attracted me. However, for a long time I was nervous because the recipes I’ve seen vary dramatically. Some call for as much as a full cup of salt while others call for as little as a couple of teaspoons. Some call for much more salt than sugar; others call for much more sugar than salt. Some recipes I’ve seen also make the process seem incredibly complex, involving weights, precisely timed curing, even the use of thin slices of lime that can’t actually touch the fish.

After consulting a ton of recipes, I became convinced that a fairly minimalist approach would work, but although I wanted to simplify the process (and avoid ending up with a fish-flavoured lollipop or salt lick), I also wanted to experiment with a variety of flavours. So I ended up making four different kinds. END_OF_DOCUMENT_TOKEN_TO_BE_REPLACED

I’m posting this a bit late, but this week has been American week at our house. Though Indian tacos and bannock were both Canadian and American, gumbo is totally Louisiana. I visited Louisiana once, years ago, before Hurricane Katrina changed New Orleans forever, and I loved the food. This was also before I had to worry about a gluten-free or low-FODMAP diet, so I chowed down on fried oyster po’ boys, muffalettas, beignets, crawfish étouffés, and of course, gumbo.

However, I left Louisiana feeling unsure about what a “proper” gumbo should be, because every one I had was significantly different. One was thick and stewy, another was thinner and soupy. One was full of seafood, another, if I remember correctly, featured only chicken and sausage. That’s because, I gather, every Louisiana chef has their own version of gumbo. About the only common ingredients seem to be some form of flour-based roux and okra. Unfortunately, both wheat flour and okra (it’s high-FODMAP) are out for me. So how to create an authentic-tasting gumbo without either of those ingredients?

END_OF_DOCUMENT_TOKEN_TO_BE_REPLACED 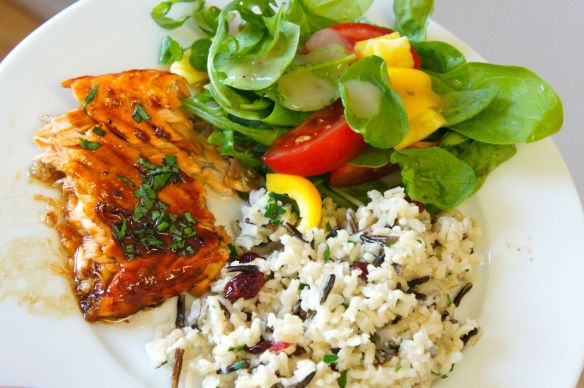 To me, nothing tastes of Western Canada (home!) like salmon does. Back home, I was super picky about which salmon I bought – I would only spend money on wild Pacific salmon, preferably sockeye or chinook; never pink, never farmed. That would still be my preference but here in the UK, it’s harder to get non-canned salmon that meets that description. (Not impossible, just harder and more expensive.) So when I saw a side of Scottish farmed Atlantic salmon on sale half price, I bought it.

You see, I’ve developed a recipe that makes any salmon taste divine. I used to think of it as semi-Canadian, semi-Japanese, but I’ve since realized it’s actually totally Canadian, since Canadian cuisine draws on all other cuisines. I like to serve it with a simple brown rice-wild rice mix with dried cranberries and fresh herbs, which is also very Canadian. So in honour of my Canada week, here’s a quick and simple midweek recipe.

END_OF_DOCUMENT_TOKEN_TO_BE_REPLACED

When I decided to designate this week Brazil week, I didn’t know I would end up making something surprisingly akin to Thai curry, only without the burn-your-tongue spiciness or the fish sauce. When I tasted my moqueca de peixe (fish stew), however, it made me realize how much of our world cuisine is interconnected, whether directly, the way Japanese curry probably evolved from curries originating further west in Asia, or indirectly, the way similar ingredients (fish, coconut milk, vegetables) produced similar results in different parts of the world such as Brazil and Thailand.

I should say that real Brazilian moqueca may be a bit different, primarily because I didn’t use any dende (red palm oil). Nor did I search it out, as it’s high in saturated fat, my cupboard space is limited, and I don’t foresee many other uses for it. I used olive oil instead. There is actually another type of Brazilian moqueca, moqueca capixaba, from the state of Espirito Santo, that uses olive oil instead of dende. That dish, however, doesn’t use coconut milk, so mine is a bit of a hybrid. That’s OK with me. My life and family are about hybridization, and as any gardener knows, hybrids are often the hardiest.

As I was researching moqueca de peixe, I found a huge range of recipes online, some very similar and some a bit different. I ended up not following any particular recipe but using what I thought would be tasty, based on the most common themes in moqueca recipes. Here’s my version. It’s easy, quick and gets even better after having sat for a day. END_OF_DOCUMENT_TOKEN_TO_BE_REPLACED 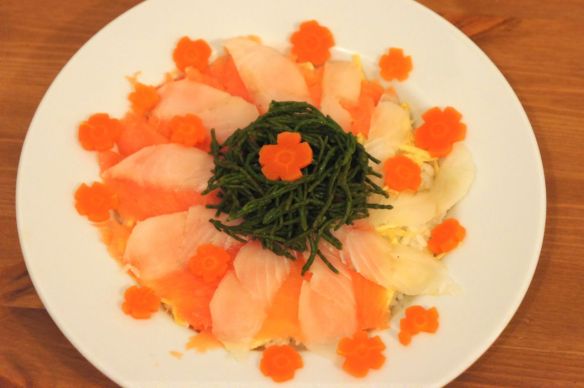 Hinamatsuri, or Girls’ Festival, is in Japan something of a spring festival as well as a celebration of girls. Though I know my friends in Canada are still shivering and shovelling, spring is starting to show its face here in England. I saw my first open daffodil today as well as a bunch of little white blossoms, so I’ve been getting into the mood for some springy food.

Chirashi sushi (translates as “scattered sushi;” it’s pronounced chirashi zushi in Japanese) is basically just a layer of vinegared rice with toppings. The toppings generally include sashimi, though it’s certainly possible to make an all-cooked version. Chirashi sushi is one of the traditional foods of Hinamatsuri. These are others too, but clam soup is out in my family because my husband is allergic to shellfish, and I didn’t think it was realistic to obtain the ingredients for sakura mochi (pounded rice cakes coloured pink and wrapped in pickled cherry leaves). Chirashi sushi, however, I could do, and easily.

Chirashi sushi is, in my mind, one of the world’s most perfect dishes. It’s super easy, healthy and incredibly delicious. It’s impressive enough to be used for entertaining or just to make a family dinner feel like a special occasion. The possibilities are endless in terms of exactly what ingredients you use and how. It’s virtually impossible to screw up. END_OF_DOCUMENT_TOKEN_TO_BE_REPLACED